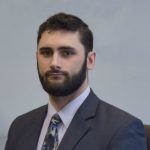 Jesse G. Hoelscher, Esq., was admitted to practice in New York State in January 2018, and joined the firm as an associate at that time. Previously, Jesse was engaged at the firm (and two others before that) as a law clerk.

A graduate of The University of Notre Dame and the State University at Buffalo School of Law, Jesse studied international economic law in New Zealand during law school and received awards for Excellence in Trial Advocacy and Proficiency in Real Property Law. He is a member of the Bar Association of Erie County and the New York State Bar Association.